yenisafak (2020-07-16). Relations with Turkey 'on solid ground': Russia. yenisafak.com Relations of Russia and Turkey are "based on solid ground" and have "positive interdependence," Russia's deputy foreign minister said on Thursday.The two countries are working together on long-term projects, including the construction of the Akkuyu nuclear power plant and the TurkStream gas pipeline, Alexander Grushko said in an interview with Russia's Interfax news agency."If you look at the content of bilateral relations, including the economy, energy, and humanitarian ties, it is hard not to see that they are based on a solid ground," he asserted."There are clearly elements of positive interdependence here. Pr…

Daniel Ellsberg (2020-07-15). The Doomsday Machine Still Exists. zcomm.org Interview on seeking profit in spite of the risk of nuclear winter is "institutional madness"

sputniknews (2020-07-15). After 75 Years, Downwind Victims of 'Dirty' Trinity Nuclear Test Shown 'Genocidal' Lack of Concern. sputniknews.com Thursday marks the 75th commemoration of the Trinity Test, the first detonation of a nuclear bomb, in the New Mexico desert. However, the bomb's dirty explosion has caused untold suffering downwind of the blast – suffering never acknowledged or compensated for by the US government, an expert told Sputnik.

_____ (2020-07-15). Deluded Britain Rows in Behind U.S. Gunboat Diplomacy on China. strategic-culture.org America's trusty British lieutenant has weighed in to stoke tensions in the South China Sea with reports that Britain is to deploy its two new aircraft carriers to the Pacific region. The carrier strike groups which include frigates, destroyers and nuclear-powered submarines, are to join with U.S. and Japanese warships to conduct naval drills. | Beijing has already

John Hawkins (2020-07-14). Doublethink Doublethink: It's Two Thinks in One! dissidentvoice.org 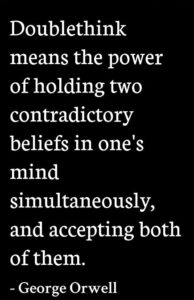 If you want a vision of the future, imagine a boot stamping on a human face — forever. — O'Brien to Winston Smith in George Orwell's Nineteen Eighty-Four Seventy years ago, on August 29, 1949, the Soviets successfully tested their first nuclear bomb, and became the only other state power on the planet, after the …

WSWS (2020-07-14). Washington renews covert campaign to destroy Iran's nuclear infrastructure. wsws.org The US is exerting maximum pressure on Iran, to cripple its economy and intimidate and starve its people, in the hope of effecting regime change.

Soraya Sepahpour-Ulrich (2020-07-14). Five Years On, the Nefarious Goals of the Iran Nuclear Deal Reveal Themselves. mintpressnews.com July 14, 2020 marks the fifth anniversary of the so-called Iran Nuclear Deal and five years on it has become more clear than ever that it was never meant to succeed.

Mehr News Agency (2020-07-14). Possible end of JCPOA, 'start of decline of multilateralism'. en.mehrnews.com TEHRAN, Jul. 14 (MNA) — Iranian Ambassador to Brussels said that the possible end of Iran's nuclear deal, Joint Comprehensive Plan of Action (JCPOA), is the start of decline of multilateralism and a serious blow to the European convergence.

yenisafak (2020-07-14). S. Korea slams Japan's 'preposterous' territorial claim. yenisafak.com South Korea on Tuesday urged Japan to retract its "unjust and preposterous claims" to the disputed Dokdo islets, stressing that such moves will only serve to harm bilateral ties.According to Yonhap News Agency, the Foreign Ministry summoned a senior Japanese diplomat to lodge a protest over the renewed claim made by Tokyo in its latest defense white paper."The Republic of Korea [ROK] strongly protests against the Japanese government's reiteration of unjust territorial claims over Dokdo, clearly an integral part of the ROK's territory […] and calls for an immediate withdrawal of such claims," the ministry said i…

Howard Lisnoff (2020-07-13). Remembering the Nuclear Freeze Movement and Its Futility. counterpunch.org It's ironic that something that so much effort went into in the early 1980s came to amount to less than nothing. The problem with the movement to reverse the global arms race was that while it raised consciousness about nuclear war and nuclear proliferation, it made no demands on power. It was like a gigantic

Lilly Adams (2020-07-13). Nuclear Threat Still Looms. progressive.org United by these tragedies, now most impacted communities have the same ultimate goals: ensuring these weapons are never used again, and that they are one day eliminated.