To defund or not to defund? | Campaigners call for BBC's licence fee to be scrapped

sputniknews (2020-07-01). S. Korea's President Reportedly Says Trump-Kim Summit Is Needed Before US November Election. sputniknews.com US President Donald Trump and North Korean leader Kim Jong-un met three times in the period between 2018 and 2019 to discuss, among other topics, the Korean peninsula and the possibility of denuclearization. However, the three one-on-one summits fell far short of achieving their goals.

sputniknews (2020-07-01). US Doesn't Rule Out Military Action Against Iran Amid Push to Renew UN Arms Embargo. sputniknews.com The demand for an extension to the embargo has not garnered support in the UN Security Council, so the US wants to trigger the snapback mechanism outlined in the 2018 nuclear deal — despite no longer being a member of the agreement.

news.un (2020-06-30). Iran nuclear deal still best way to ensure peace, DiCarlo tells Security Council. news.un.org The UN regrets that the future of the Joint Comprehensive Plan of Action (JCPOA) is in doubt, but notwithstanding current challenges, that landmark deal is still the best way to ensure that Iran's nuclear programme proceeds along a peaceful path, the UN's top political official said on Tuesday.

Ian Zabarte (2020-06-30). Nuclear Weapons' Testing in Nevada and the Shoshone People. The Dark Legacy of Radiation Exposure. globalresearch.ca Regarding Gary Martin's June 15 Review-Journal article, "Nuke test rumors spur Nevada lawmakers": As a Shoshone, we always had horses. My grandfather always told me, "Stop kicking up dust." Now I understand that it was because of the radioactive fallout….

yenisafak (2020-06-30). US urges UN to extend Iran arms embargo. yenisafak.com US Secretary of State Mike Pompeo urged the UN Security Council (UNSC) to extend Tuesday an arms embargo against Iran and warned that ending it would risk stability in the Middle East."Iran will hold a sword of Damocles over the economic stability of the Middle East, endangering nations like Russia and China that rely on stable energy prices," Pompeo told a virtual UNSC session.The ban on arms transactions with Iran is set to expire Oct. 18, under terms of a 2015 nuclear deal.Pompeo said Iran could directly move to buy Russian fighter jets and upgrade its submarine fleet if the embargo expires and Tehran would be…

yenisafak (2020-06-30). France's oldest nuclear power plant shuts down. yenisafak.com France's oldest power plant Fessenheim went offline at midnight on Monday after 40 years of operation, the state-owned energy company EDF announced.France has 56 nuclear reactors currently in operation which provide 75% of the country's energy consumption, making the nation the world's biggest consumer of nuclear energy.The development of Fessenheim was welcome news for residents of the region, previously fairly devoid of industry or any commerce. The location was an attractive one for its proximity to Germany: Fessenheim is a commune located directly on the border, in the Haut-Rhin Department in the Grand Est re… North Korea is in the news again. As always, that means that it is time for mainstream journalists and establishment figures to reach for the handy cliché and to recycle received opinion as a substitute for thought. Terms like "provocation," "threat," and "aggression" abound. Not surprisingly, powerful political and military actors in the United States 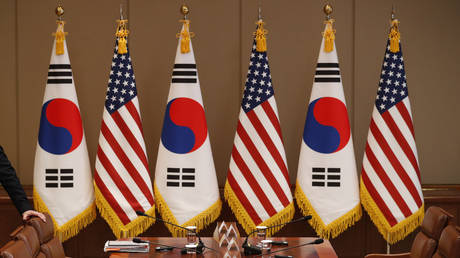 Seoul has accused Japan of brazen behavior after Tokyo objected to Trump's idea of inviting South Korea into the G7 as a standing member. The proposal may weaken Japan's political clout within the group, Japanese media claims. | A South Korean parliament official has accused Japan of constantly "harming" its neighboring country, in reaction to a news report published by Japanese news agency

_____ (2020-06-29). US And Saudi Nuclear Program: The Trump Administration's Secrecy. popularresistance.org A recent report by the US House of Representatives revealed that Trump administration has accelerated the process of transferring "very sensitive" nuclear technology to Saudi Arabia. | The US House of Representatives has revealed that the Donald Trump administration has tried to provide Saudi Arabia with highly sensitive and advanced nuclear technology as soon as possible, regardless of legal and security concerns, the report said. | The report also expressed concern about the Trump administration's secretive engagement with Saudi Arabia. | The report goes on to say that private companies that are in close contac…

Prof. Wolff: Is This the Eve of Destruction?

Posted by The Zero Hour with RJ Eskow.